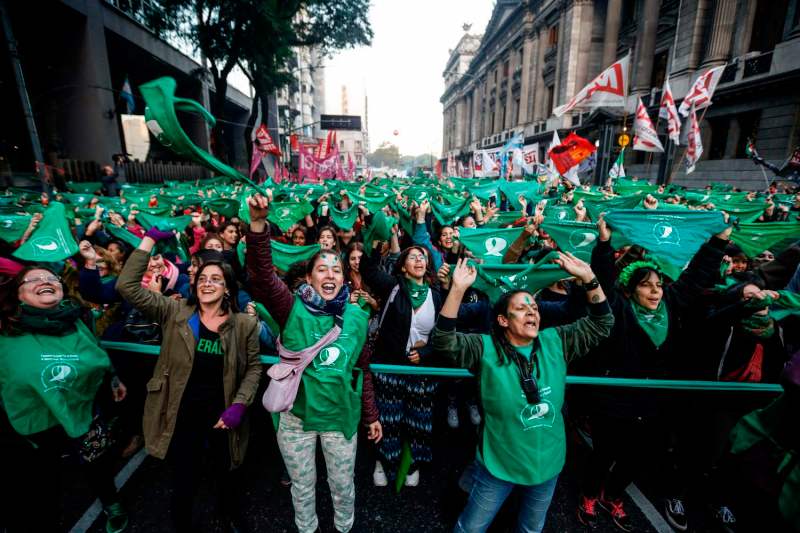 SALTA, Argentina —When Milagros Peñalba and Camila Monzón, both 17, consider supporting a political candidate in Argentina’s next presidential election, the key issue is not how to tackle Argentina’s massive debt burden or how to curb skyrocketing inflation. What they care about most is whether the candidates are in favor of legalizing abortion.

Since the nationwide debate on abortion rights last year culminated in disappointment for those in favor of legalization, the two youth activists have campaigned for reproductive rights, better sex education, and access to contraceptives in their hometown of Salta, in Argentina’s deeply conservative north. They also organize events encouraging their peers to get to know their political representatives.

“The movement really ignited an interest among youth in politics,” said Peñalba, who spoke in the Senate in favor of legalization last year. “We want to see that our representatives stand for what we believe in.”

“Before, here in Salta, we didn’t have a youth movement,” Monzón added as she adjusted her green handkerchief, a symbol of the abortion rights movement. “Now, we can at least be aware of which deputies are pro-life and which ones are demanding the legalization of abortion.” 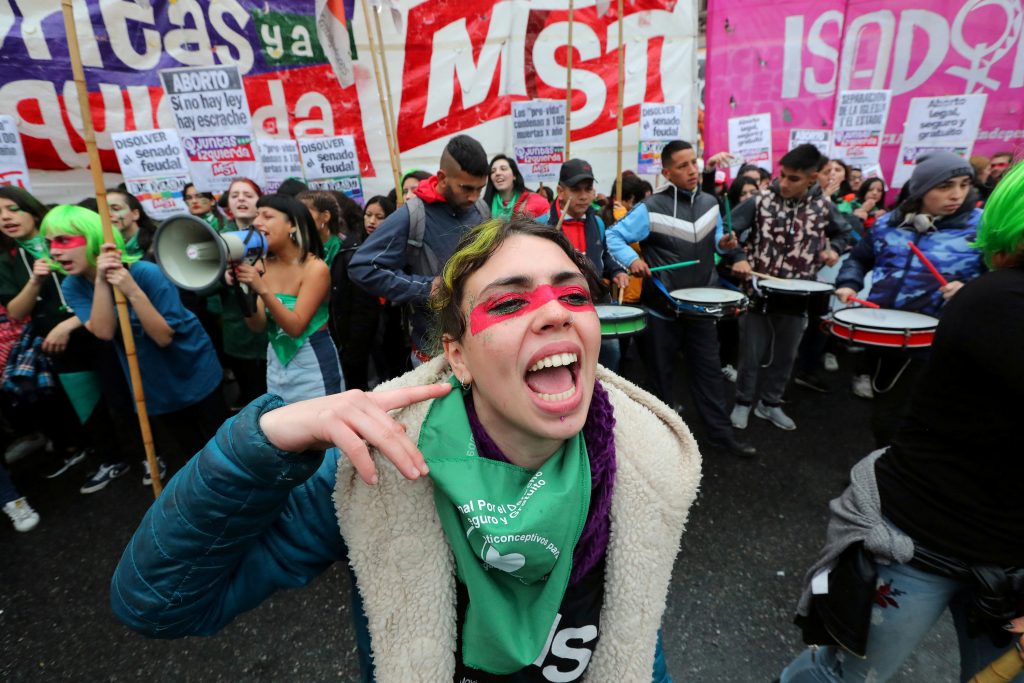 Yet the issue that matters most to them—and to many other Argentine first-time voters—is one that has been almost entirely absent from the agenda of major presidential candidates ahead of the country’s general election in October. Argentina made headlines last year when it narrowly failed to approve legislation that would have made elective abortion legal up to 14 weeks into a pregnancy. Currently, the practice is only allowed in the cases of rape or risk to the mother’s life, and women who seek illegal abortions can face up to four years in prison.

Pro-abortion rights campaigners introduced a second legalization bill in May in an attempt to keep the subject in the spotlight. But instead of reproductive rights, the country’s deteriorating economy has taken center stage. “Like in elections in most places, economic issues are dominating in Argentina,” said Benjamin Gedan, the deputy director of the Latin America program at the Wilson Center and the director of the think tank’s Argentina Project. “It’s hard to be heard over the economic argument.”

And the economy appears by far the most important priority to voters, who seemed to be punishing President Mauricio Macri for austerity and failure to boost growth. Sunday’s primary elections—a key bellwether for the October vote—saw opposition candidate Alberto Fernández capture a larger-than-expected 47 percent of the vote. Macri, whose austere economic policies have fueled anger in many voters as jobs numbers have failed to rise and inflation has spiraled, trailed at 32 percent.

Many analysts had predicted a closer contest between Macri and the moderate candidate Fernández, whose running mate is former President Cristina Fernández de Kirchner, a populist who, despite numerous allegations of corruption, remains a political force in Argentina. The primary results also indicate that voters are unlikely to give Macri another term to fulfill his promises of economic recovery.

In a polarizing and uncertain race, both campaigns have been wary of delving into divisive issues such as abortion for fear of losing, said Mabel Bianco, the president and founder of the Foundation for Studies and Research on Women, a nonprofit that campaigns on women’s health issues. “They don’t want to incorporate something that could divide voters,” she said. “So they prefer people to be voting for them based on economic issues.”

For Macri, who doesn’t personally approve of abortion but allowed the debate in Congress last year, raising the issue again could risk further alienating his more conservative support base and decimating his chances of reelection. “He can’t risk pushing too hard on this issue,” Gedan said. “Because a lot of his core supporters remain uncomfortable with legalization—and frankly, even with decriminalization.”

The abortion debate also caused deep divisions within parties last year, making it more difficult to adopt a unified position. While Macri is against legalization, for instance, his vice presidential running mate is in favor. “It doesn’t line up cleanly on a partisan basis,” Gedan said.

Fernández and his running mate have also taken a cautious approach. Both have signaled in recent years that they are in favor of legalizing abortion, but neither has been vocal about the issue while campaigning, and the duo has not committed to pushing a reproductive rights agenda forward if elected.

“They [Fernández and Kirchner] know they could have the [pro-abortion rights] greens with them,” said Mariela Belski, the executive director of Amnesty International Argentina, which has developed an online platform that tracks candidates’ positions on abortion by displaying a green heart next to ones who support legalizing it and a hanger next to the ones who oppose legalization. “But they also have a big constituency that is probably against abortion—people living in very poor areas where the church is very involved.”

The Roman Catholic Church, which remains highly influential in Argentine politics and society, has encouraged voters to reject candidates who are pro-abortion rights. Meanwhile, the country’s growing anti-abortion movement—a key reason for the failure of last year’s bill—has focused its energy and resources on getting anti-abortion representatives elected to Congress in a strategic attempt to ensure future legalization attempts are similarly blocked.

This increasingly influential political and social force—rooted in an evangelical movement gaining momentum in Argentina and across Latin America—has also thrown its support behind a presidential candidate who supports “saving both lives.” Some 1,000 evangelical pastors pledged support to Juan José Gómez Centurión, who ultimately drew only 2.6 percent of the primary vote but, notably, made it over the threshold needed to participate in the October elections.

Even after Sunday’s comfortable lead over Macri, Fernández is unlikely to emphasize abortion rights ahead of the election, as it remains a divisive issue for his party and his constituents. However, the opposition ticket has already been “more successful at mobilizing young voters, for whom abortion rights are a priority issue,” Gedan noted.

Notably, Kirchner, despite governing as one of a wave of high-profile leftist heads of state in Latin America, never brought abortion forward for debate during her eight years in power. While a second abortion debate is more likely in a Fernández administration, Belski noted it’s far from certain that either candidate will broach the subject even after winning the election.

“Macri is not going to disappoint his constituency again,” she said. “And Fernández and Cristina, I’m not sure if they are going to put the subject in the agenda either. They also want to win the next elections coming in another four years, so they need to bring to their side the constituency that is against abortion.”

The only candidates who have set a firm reproductive rights agenda are those from fringe groups on the left, who are vying for the anti-system vote but stand little chance of gaining momentum. But there is a way forward for candidates, if not in this election but in future contests, by energizing young voters. “If you look at the presidential candidates themselves, you don’t have a lot of champions on this issue,” said Gedan, of the Wilson Center. “And to have a real champion running on that issue might have been a way to mobilize an important voting bloc.”

During the campaigns, “you can see that young people are not the target,” Belski said. “They are not enough to make [major candidates] win or lose. So they are not an incentive.” In Argentina, voting is mandatory for anyone between the ages of 18 and 70, while those ages 16 and 17 can cast a vote but don’t face penalties if they opt out.

Argentines between the ages of 15 and 24 represent just under a sixth of the population, but young voters often participate in elections at a lower rate. Since the law was changed to allow 16- and 17-year-olds to vote, the number of youth casting a ballot has doubled, but the rate of participation in this age group has remained at just over 50 percent—far below that of the broader electorate.

But failing to target young voters could prove a missed opportunity, especially as they become more politically engaged. UNICEF has been campaigning in Argentina to encourage those aged 16 to 18 to vote, but Bianco said it is not yet clear if it will translate into higher turnout.

Peñalba, for one, is skeptical of candidates with a lukewarm stance on abortion. “I don’t think they care about our rights,” she said. “They only care about gaining votes.” When Juan Manuel Urtubey, the governor of Salta province, where the two activists live, announced plans to run for president earlier this year, he appeared willing to put reproductive rights on the agenda by signaling that he favored holding a referendum on legalizing abortion.

“I do not have a favorable position regarding abortion,” Urtubey told me in an interview earlier this year. “But I am in favor of legalization because I cannot impose my criteria over others.” Urtubey’s campaign ultimately failed to gain traction, though, and he eventually joined the ticket of Roberto Lavagna, a former economy minister who secured 8.2 percent of Sunday’s vote and who has spoken out against legalizing abortion.

According to Gedan, Urtubey “saw the writing on the wall,” recognizing that reproductive rights are becoming a key issue for a younger, less religious Argentine electorate. In future elections, other candidates may also have to turn their attention to the abortion issue once again, especially as Argentina’s youngest voters come of mandatory voting age.

But while none of the leading candidates address the issue, young voters may once again choose not to cast a ballot at all. “The candidates are not speaking to them … it seems like they are not important,” Bianco said. “But they’re an important force, and they’re growing.”